First Ever English Translation of the Table of Contents
by Billy Ristuccia (Draft Version 1.0)

Here you will find my English translation of the table of contents for Okuyama Ryuho, the founder of Hakko-ryu Jujutsu 八光流柔術 book: Kohō Shiatsu Chihō Gaku 皇法指圧治方学 (Imperial Finger Pressure Therapy Study). This book was designed as a student reference manual for those who were taking the training. The book details the philosophy, diagnostic methods, Koho Shiatsu therapy techniques,  and explanations of the internal organs from both an eastern and western medical perspective. The manual also covers the Goshin Taiso (self-protection meridian regulating exercises) for checking the state of your own meridians and regulating their healthy flow.

Koho Shiatsu 皇法指圧 is one of the first systems of Shiatsu developed in Japan. It is designed to be taught along with Hakko-ryu Jujutsu. Both the martial arts and medical arts of the school should be taught and learned together. One powers or fuels the other. The Jujutsu self-defense methods of Hakko-ryu are designed to disrupt the meridians and nerves of the attacker’s body. This causes the attacker great pain allowing them to be controlled with little power without the needless use of injuring them. Okuyama Sensei always stressed that a true master of Hakko-ryu has the ability with a single finger to either harm or heal. 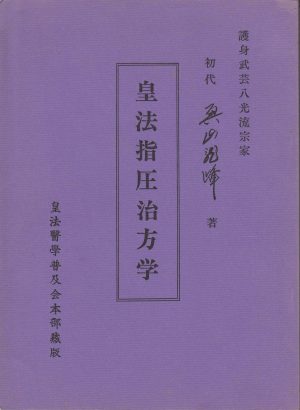 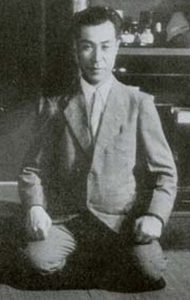 In 1936, Hirata Sensei encountered Hida Haramitsu 肥田春充 and learned his style of Kyōkenjutsu 強健術 (Strong Health Method), which he initially developed to strengthen his own weak body and mind. Together they devised a new meridian exercise method: Keiraku Shiki Chūshin Soren Hō 経絡式中心操練法. In collaboration with Hida they announced together the Kokumin Taiiku 国民体育 (National Physical Education). Okuyama Sensei was taught these exercises and included only an introduction to the core principles of the Kyōkenjutsu system as the 6th chapter of his Koho Shiatsu book. 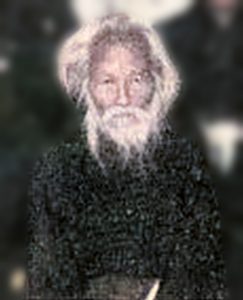 Minami Haizan (Katsutarō) 南拜山 (勝太郎) was a Japanese medicine doctor and scientist from Fukuoka Prefecture, Kyushu. Minami Sensei studied Japanese medicine since childhood, but because of Japan’s efforts to westernize after the Meiji Restoration, he wished to expand his understanding of western medicine, so he travelled to the United States. He studied both philosophy and western medicine, and after nine years he obtained a philosophy Ph.D. Minami Sensei then went to England to study for two years before returning to Japan in 1901. After returning to Japan, he aimed to revive Japanese medicine, and in 1927 together with dozens of other doctors, including Taiyan Asahina, a professor of medicine and a doctor of pharmacy, formed the Tōyō Igaku Dōkai 東洋醫學道會 (Eastern Medicine Association), with Minami Sensei as the chairman. In 1928 the organization established a branch in Taiwan. Okuyama Sensei learned from Minami Sensei Tōyō Igaku 東洋医学 (Oriental Medicine), Shinri Ryōhō 心理療法 (Psychotherapy), and Western Medicine. Minami Haizan was on the board of of Okuyama Sensei’s martial arts school until his passing.

Daisan Sho 第三章 (Chapter 3) of Okuyama Sensei’s purple Koho Shiatsu book is dedicated entirely to various methods of diagnosis Shindan-Hō 診断法. Here is an outline of the methods that are introduced in this chapter:

In this diagnostic method, Okuyama Sensei explains the signs to look for when one notices the color of the palm has changed or certain lines have swelled or been crossed with various marks. He explains which palm is predominant based on ones age and gender, and how to notice signs of illness within the internal organs.